Our commitment to inclusivity
Dartmouth’s capacity to advance its dual mission of education and research depends upon the full diversity and inclusivity of this community. We must increase diversity among our faculty, students, and staff. As we do so, we must also create a community in which every individual, regardless of gender, gender identity, sexual orientation, race, ethnicity, socio-economic status, disability, nationality, political or religious views, or position within the institution, is respected. On this close-knit and intimate campus, we must ensure that every person knows that they are a valued member of our community.
The C. Dwight Lahr Lecture Series

C. Dwight Lahr was named professor of mathematics emeritus at Dartmouth College. He first joined the Dartmouth faculty in 1975 as an assistant professor. Dr. Lahr was promoted to associate professor in 1981 and assumed the roles of associate dean of faculty for sciences and dean of graduate studies. He was named full professor and dean of the faculty in 1984, thus becoming the first Black professor to get tenure in an Ivy League School department of mathematics. He retired from teaching at Dartmouth in 2014.

A Dream Deferred: 50 Years of Blacks in Mathematics 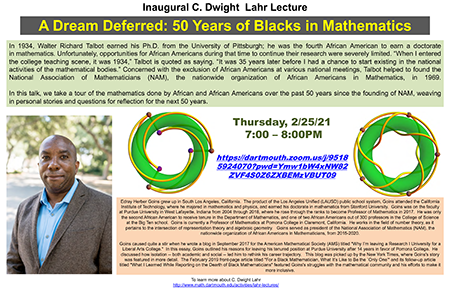