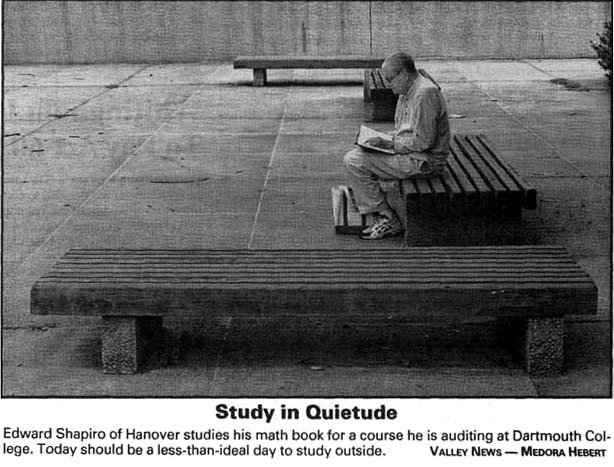 Ed Shapiro received his Ph.D. in chemistry from Purdue University and had a successful career including founding New England Nuclear which produces radioactive isotopes for research in medicine and science. In graduate school he took more math courses than chemistry courses including courses in complex variables and partial differential equations. Until he started auditing courses at Dartmouth he had, however, never run into such concepts as the union of two sets or functions as ordered pairs. His main interest was number theory and was extremely good at mental calculations such as factoring large numbers.

After he retired and moved to Hanover he would typically audit one course at a time in a variety of subjects from Chinese to Shakespeare to Abstract Algebra. Again math was his long time favorite. The one course would get a lot of attention and he was well liked and respected by both his fellow students and the teachers. He was very appreciative of the education he received at Dartmouth and was supportive of the departments from which he benefited.

Back to Shapiro Visitors.
Last modified on March 01, 2019
Powered by GNU / Linux